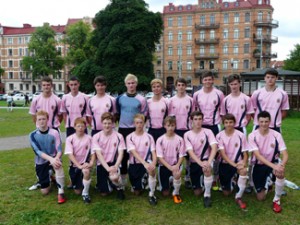 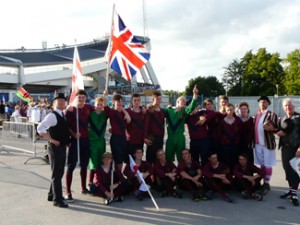 Charterhouse finished this year’s Gothia Cup with their best-ever run in the tournament,
progressing into the B-round knock-out phase through to the last 16 of the competition, before
losing out to a Norwegian side.  The whole event proved a great learning experience for all and
another great week of tournament football

ON PARADE – One big highlight of this year’s tournament was the opening ceremony, with the
squad on parade as English representatives and flag bearers in the 42,000 seater Ullevi stadium.
To celebrate our 400th year of the school, we paraded in replicas of a Victorian football kit with
staff Malcolm Bailey, Richard Lewis and Ed How as Victorian style manager, trainer & sponge-boy !

copied with thanks from a web article by Malcolm Bailey